GENEVA – A joint study conducted by the World Health Organization and China on the origins of the novel coronavirus concluded it is “extremely unlikely” the virus escaped from a laboratory in the central Chinese city of Wuhan, according to the report released Tuesday.

While China hailed the report, which denied a theory advanced by former U.S. President Donald Trump that the Chinese laboratory might have been the birthplace of the virus, 14 countries including Japan and the United States expressed “shared concerns” over the study, pointing out it was “significantly delayed and lacked access to complete, original data and samples.”

In a joint statement, the 14 countries including Australia, Britain, Canada and South Korea called for “a swift, effective, transparent, science-based, and independent process” for international evaluations in the event of future outbreaks.

The report concluded that the virus was most likely transmitted to humans from an unidentified animal. “As far as (the) WHO is concerned all hypotheses remain on the table,” WHO Director General Tedros Ghebreyesus said.

“Although the team has concluded that a laboratory leak is the least likely hypothesis, this requires further investigation, potentially with additional missions involving specialist experts,” he added.

According to the report, viruses similar to the novel coronavirus have been found in bats and pangolins, but the intermediate animal host from which it was transmitted to humans has yet to be traced.

The report, based on a study carried out by a team of international experts, suggested that minks and cats, which are known to be susceptible to infection, could be among potential animal hosts.

The Trump administration had pushed a theory that the novel coronavirus might have come from the Wuhan Institute of Virology, claiming some researchers there developed symptoms consistent with COVID-19 in the fall of 2019.

But the team said it had found no evidence to support the claim during a visit it made between January and February this year to the Chinese city to investigate the origins of the virus.

Safety management at the institute and two other nearby laboratories was appropriate and there were no cases of infection among staff at those facilities before December 2019, when the first human cases of the novel coronavirus in Wuhan were identified by China.

Chinese authorities have claimed that the virus might have been brought into the country by frozen food imports. 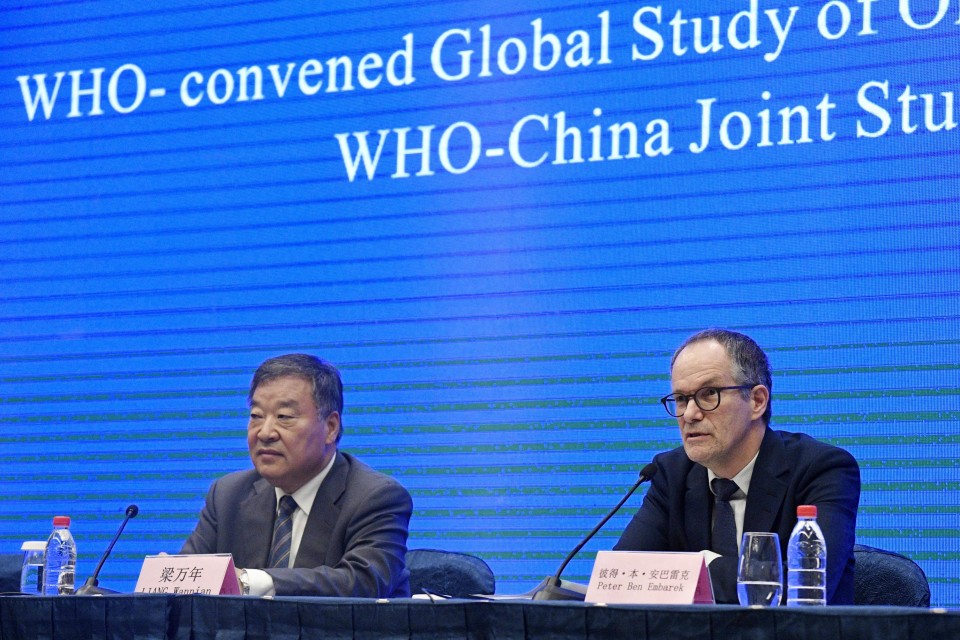 The team’s report said such transmission is possible but that it is not verifiable as imported frozen products were not considered a potential infection route early in the virus’ spread and there was no testing of them at the time.

The team, which drew up the report with China, was formed by experts from various countries and officials from the WHO, the World Organization for Animal Health, and the Food and Agriculture Organization.

The team, which underwent two weeks of quarantine after entering Wuhan in mid-January, inspected the institute and other sites thought to be connected with the virus such as a seafood market. It also had discussions with Chinese experts.