TOKYO – Japan and Indonesia signed Tuesday a deal enabling exports of Japanese-made defense equipment to the Southeast Asian country, as they try to boost cooperation amid China’s rising assertiveness in regional waters.

The accord on the transfer of defense equipment and technology was signed after the foreign and defense ministers of Japan and Indonesia met in Tokyo for the so-called two-plus-two talks, in which they also condemned the recent killings of peaceful protestors by security forces in Myanmar.

The ministers shared “serious concerns” about China’s “continued and strengthened unilateral attempts to alter the status quo by force” in the South and East China seas, including the enactment of a new Chinese coast guard law, Japanese Foreign Minister Toshimitsu Motegi told a joint press conference following the talks.

The law, put into effect in February, allows the Chinese coast guard to fire on vessels intruding into what it considers its waters.

“The law should not infringe legitimate rights and interests,” Japan’s Defense Minister Nobuo Kishi said at the press conference.

Japan is troubled by Chinese coast guard ships’ repeated intrusions into Japanese territorial waters around the Senkaku Islands in the East China Sea.

China claims the uninhabited group of islets, calling them Diaoyu.

Indonesia, meanwhile, faces tensions in its exclusive economic zone in the waters north of the Natuna Islands with China, where Chinese fishing boats, accompanied by Chinese coast guard vessels are claimed to be engaged in illegal fishing.

The EEZ overlaps with China’s self-proclaimed “nine-dash” line that marks its expansive claims in the South China Sea, where it has disputes with the Philippines, Vietnam, Malaysia and Brunei.

“I am convinced that the pact will form the foundation of a further expansion of our bilateral security cooperation and become a symbol of our joint efforts in facing regional threats,” Motegi said.

Indonesian Defense Minister Prabowo Subianto said he invites Japan to participate “in our defense industry and…in the modernization of the Indonesian defense capacity.”

In the talks, the second of its kind for the two countries since 2015, the ministers also shared “strong concerns” about the crisis in Myanmar, where the military seized power in the Feb. 1 coup, Motegi said.

“Indonesia strongly denounces this kind of act,” Foreign Minister Retno Marsudi said, referring to the use of force by the Myanmar security forces on Saturday that killed more than 100 demonstrators in the bloodiest day of protests since the coup.

“It is unacceptable,” she also said. “For Indonesia, safety and the well-being of the people of Myanmar are paramount. Dialogue should be pursued to bring democracy, peace and stability back in Myanmar.” 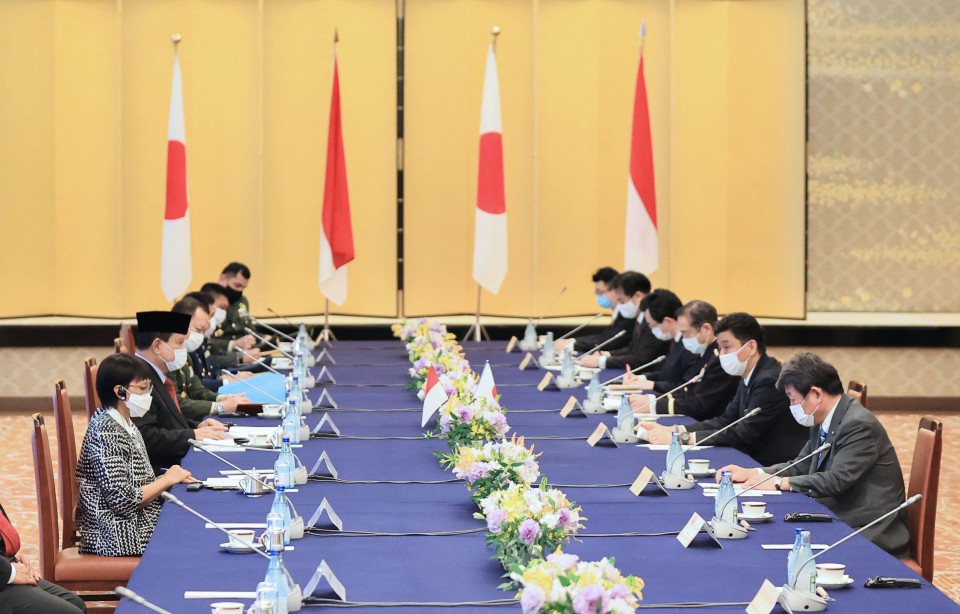 Indonesia has led efforts in the Association of Southeast Asian Nations to seek a peaceful resolution to the crisis, even as the bloc upholds the principle of noninterference in members’ internal affairs. Myanmar belongs to the 10-nation group.

Indonesia has called for an extraordinary summit of ASEAN to discuss the crisis in Myanmar.

The death toll from the military’s violent campaign to quell the unrest in Myanmar has reached at least 510, according to a rights group monitoring the situation.