IWAKI, Japan – The torch relay for this summer’s Tokyo Olympics started Thursday in a quiet atmosphere, going first through towns most affected by a nuclear meltdown a decade ago in Japan’s northeastern prefecture of Fukushima, amid public health worries over the coronavirus.

The opening ceremony of the nationwide relay at the J-Village soccer training center was held without spectators as a precaution against the spread of the coronavirus, a year since the Olympics and Paralympics were pushed back for the same reason.

About 10,000 torchbearers will run through 859 municipalities in all of Japan’s 47 prefectures, with parts of the four-month journey encompassing famous locations such as Mt. Fuji, while unprecedented measures will be taken to protect the health of participants and spectators.

The relay will be a crucial opportunity for organizers to increase support for the Olympics among the Japanese public and convince people that they are capable of safely staging the games, expected to involve over 15,000 athletes.

“For the past year, though the whole world was in a difficult situation, the flame kept burning quietly but powerfully,” Seiko Hashimoto, president of the organizing committee, said at the ceremony. “It had been waiting for this day like a cherry blossom bud that is about to bloom.”

“The flame will embark on a 121-day journey and will carry the hopes of the Japanese people and wishes for peace from people around the world,” she said.

The committee has said the relay might be suspended or some routes skipped if too many people gather on roadsides. Fans are encouraged to turn to live online broadcasts and refrain from traveling outside of their home prefectures to watch the event.

Spectators must wear face masks and are also urged to clap rather than cheer. The runners, who will each carry a cherry blossom-motif torch over a distance of about 200 meters, need to keep a log of their health condition and are asked not to dine out with others.

“I wanted to cheer loudly for the runners and it was a bit sad to have many restrictions,” Akiko Yokoe, 48, said in Iwaki, a coastal city that had the longest distance of the relay on the first day. “I know there is debate over whether the Olympics should be held, but I was very glad it was staged here. I was very moved.”

“Now, I feel like the Olympics are finally approaching,” she said. 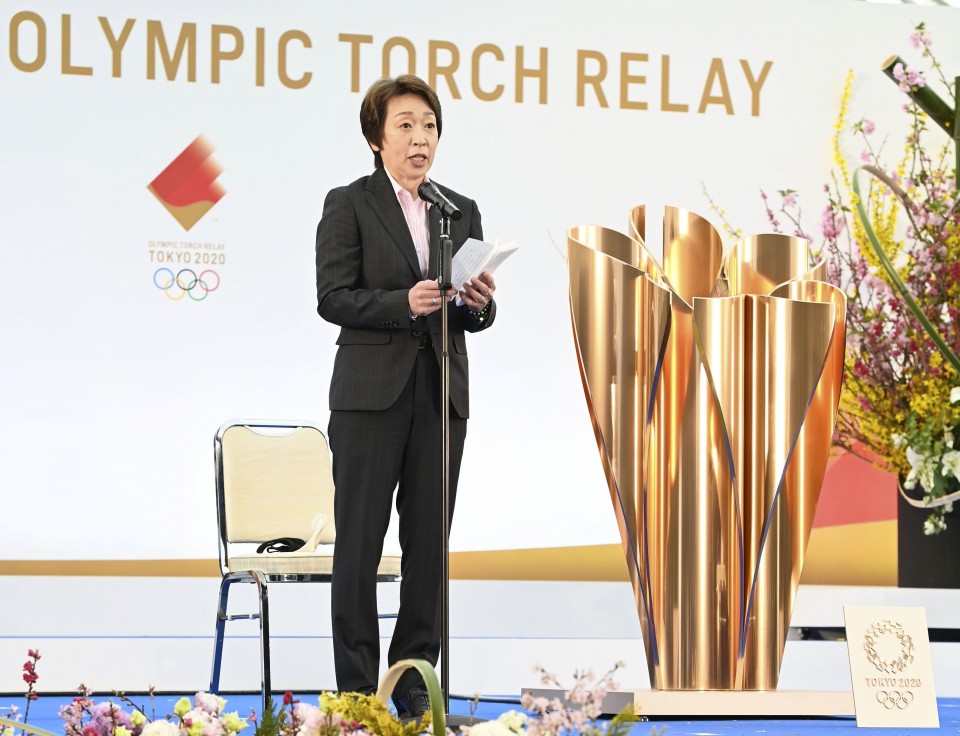 Prime Minister Yoshihide Suga, who skipped the opening ceremony, told reporters in Tokyo, “This is a great opportunity for Japan to get a real sense that the Olympics and Paralympics are nearing.”

A few hours after North Korea fired ballistic missiles toward the Sea of Japan for the first time in a year, Suga also said the government remains committed to doing its utmost to stage a “safe and secure” games.

Held under the concept of “Hope Lights Our Way,” the relay began in Fukushima in a bid to showcase the progress Japan has made with the reconstruction of the region ravaged by the March 2011 earthquake, tsunami and nuclear disaster.

Members of the Nadeshiko Japan soccer team that won the 2011 Women’s World Cup were the first torchbearers starting from the J-Village sports complex, which served as a frontline base during the nuclear crisis at the Fukushima Daiichi power plant some 20 kilometers away.

After running in Futaba, which co-hosts the crippled plant, Shun Idogawa said, “I’m very happy to be able to run in a place that I’m familiar with. I wanted more people to know about the town and other disaster-hit areas.”

The 1.2-kilogram torches are partially crafted from aluminum recycled from prefabricated temporary housing units built in the region following the massive quake.

The flame was lit in Greece and arrived in Japan on March 20 last year, just four days before the Olympics were postponed. Since then, it had been exhibited around the country.

In an Olympic first, the torches will burn hydrogen, an element that emits no carbon dioxide, as fuel in some relay segments as a representation of Japanese organizers’ commitment to environmental sustainability. 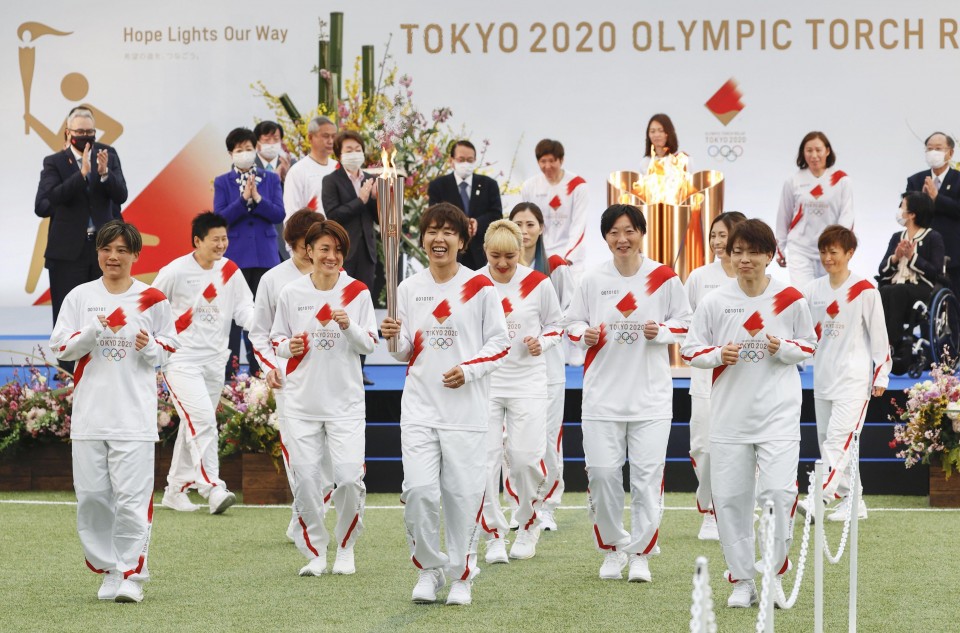 Members of the 2011 Women’s World Cup-winning Japan soccer team run at the start of the Tokyo Olympic torch relay at the J-Village soccer training center in Fukushima Prefecture on March 25, 2021. (Kyodo) ==Kyodo

While the relay is also expected to involve celebrities and athletes as participants, many have opted to withdraw at the last minute, citing scheduling conflicts and concerns that their participation may draw large crowds.

Even though the games were pushed back for one year, the world is far from getting the virus under control, with the emergence of more contagious variants adding uncertainty to the prospect of a return to normal life.

Many people in Japan have voiced skepticism over whether the Olympics can be staged safely in just four months’ time.

According to a recent Kyodo News poll, only 23.2 percent said the games should go ahead this summer, while 39.8 percent thought they should be canceled.

Japan has logged about 462,000 coronavirus cases and 9,000 deaths, relatively low numbers compared with other countries of comparable size.

But medical experts have warned of a possible resurgence of infections after the government lifted a state of emergency for Tokyo and neighboring prefectures four days before the start of the relay.

In any case, the games will look completely different from previous editions as people from around the world will be unable to gather and celebrate.

On Saturday, the organizing bodies made the unprecedented decision to hold the Tokyo Games without overseas spectators.

After traveling to 26 municipalities in Fukushima Prefecture, the flame will head south, reaching the subtropical island prefecture of Okinawa around the start of May before working its way to Hokkaido at the other end of the country and then to Tokyo.

Before entering the opening ceremony on July 23 at the National Stadium, it will pass by various famous tourist attractions, including Todaiji temple in Nara and Hiroshima’s Atomic Bomb Dome, the skeletal remains of a building preserved as a memorial after the 1945 explosion over the city.