TOKYO – Shrines across Japan would usually expect to welcome millions of people to celebrate New Year, but the novel coronavirus pandemic has dampened the celebratory mood this time as the country faces a third wave of infections.

Kanda Myojin, a major shrine in Tokyo, revealed its restrictions and countermeasures on its website early on, focusing on following government protocols and limiting situations that could lead to crowding.

“It is painful to have to put restrictions in place, as we would normally like to invite as many people as possible,” said senior priest Mizuki Takashima, 27.

Annual New Year’s shrine visits called “hatsumode” are practiced by many across the country, a tradition which sees families and friends get together in droves to pay their respects in the first few days of January.

Many often huddle close together in the cold as they wait in snaking queues and drop or throw coins into a shrine’s offertory box as they near the front of the structure.

While many shrines typically stay open even in the twilight hours for New Year’s, some have decided to keep their gates shut this year. Although Kanda Myojin will stay open through the night, it has asked visitors to avoid coming at midnight and early on Jan. 1.

People will also be able to keep track of how congested the shrine is by tuning into its live stream online, according to its website.

The shrine, which dates back to the 8th century and houses a main pavilion built in 1923, is a popular draw for foreign tourists. However, the number of visitors to Japan has dwindled to nearly zero since the country closed its borders to tourists to stem the spread of the virus.

“Overall visitor numbers also dropped by around 90 percent in February,” Takashima said. The fall came a month before the government imposed a nationwide state of emergency that kept many people from traveling.

Visitor numbers recovered in the first half of June following a slowing down of the pandemic and the end of the state of emergency in late May. However, visitor numbers again dipped as infections began to steadily rise once again later that summer in the “second wave” of the pandemic.

The shrine does not keep track of its annual visitor numbers but says they have not visibly recovered.

But as people refrain from going out, it hopes to reach them online. In November, Kanda Myojin launched an online retail platform for its “omamori,” or good luck charms such as those for easy births which people often purchase upon visiting shrines. The shrine said it set it up in response to popular demand.

The shrine began implementing anti-coronavirus measures in March when case numbers began to surge, and will require visitors for the New Year to keep a distance between one another, as well as to wear a face mask at all times. They will not, however, limit the number of visitors within its grounds.

Their guidelines, which also include the use of alcohol-based and other disinfectants, refer to safety measures set by other shrines, but are largely based on government recommendations.

For the past 30 years, Kanda Myojin has also been conducting New Year ceremonies indoors to usher in good luck for businesses across Japan. Each January, it has performed rites for as many as 10,000 firms. 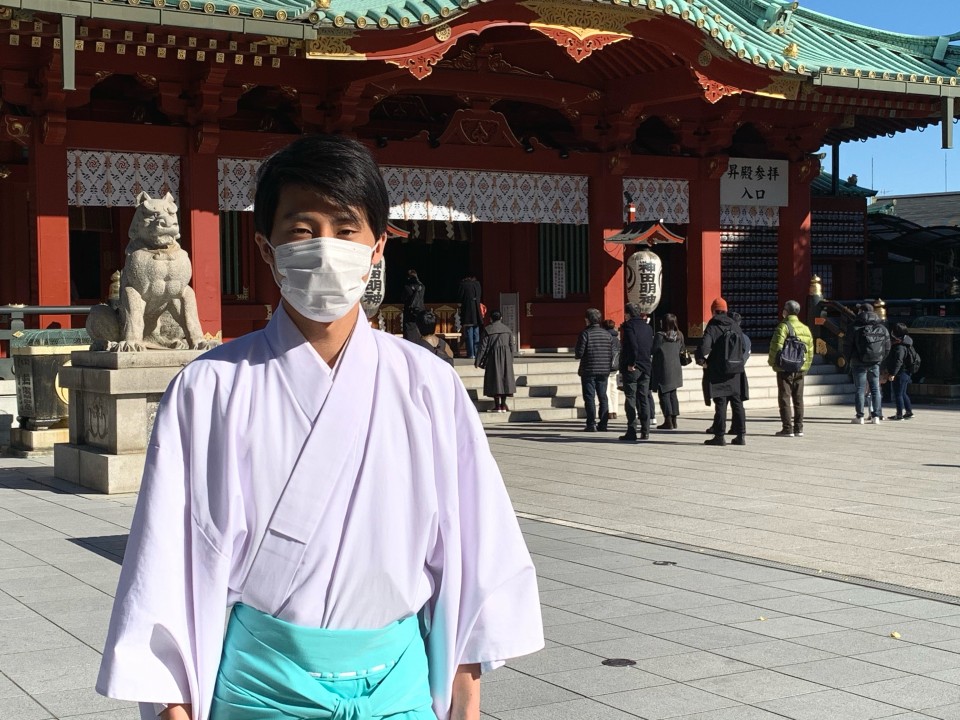 But while as many as 100 employees have sat in on past ceremonies, the number will be limited to seven this year to prevent the spread of the virus, Takashima said.

There has not been a dramatic drop in business inquiries for the rites, with just around 500 fewer than the previous year, he added.

Meanwhile, the shrine has also been readying for its annual Kanda Matsuri in late spring, which is considered to be one of the three great Shinto festivals in Japan and often brings bustling crowds to view the spectacle. However, worries abound about how the pandemic may affect the event.

“It’s all up in the air — we may have to cancel it if the situation worsens, but we may be able to hold it if things get better,” Takashima said.

According to the priest, people find comfort in the presence of shrines in times of crisis, with the structures serving as a place of security in a state of uncertainty.

After the March 11 earthquake and tsunami in 2011, which led to the Fukushima Daiichi nuclear meltdown in northeastern Japan, Kanda Myojin welcomed more visitors for hatsumode than in average years.

“We don’t want to rush people to get them to visit,” he said. “We will stay calm and be prepared to welcome people back.”