The package includes extensions of subsidy programs aimed at promoting domestic travel, spurring consumption and helping companies maintain employment, as well as incentives for digitalization and carbon reduction, according to government officials.

Prime Minister Yoshihide Suga said his government estimates the stimulus measures will boost Japan’s real gross domestic product by 3.6 percent, helping the world’s third-largest economy to continue rebounding from the worst contraction on record since 1955 in the April-June quarter due to the pandemic.

To help fund the stimulus, fiscal spending of around 30.6 trillion yen will be secured in a third supplementary budget for fiscal 2020 through next March and an initial budget for fiscal 2021. Both are expected to get Cabinet approval later this month, the officials said.

“We will maintain employment, keep businesses going and revive the economy,” Suga said at a meeting of the government’s Council on Economic and Fiscal Policy.

The package is the first drawn up to fight the pandemic since Suga took office in mid-September. It came as Japan has seen record numbers of new coronavirus cases, seriously ill patients and daily death tolls in recent weeks, raising concern over the strain on the medical system.

Separately, the government said Tuesday that the domestic economy in the July-September period grew an annualized real 22.9 percent from the previous quarter. The figure was up from the preliminary figure of 21.4 percent, and a sharp turnaround after a state of emergency over the virus caused it to shrink an annualized 29.2 percent in the April-June period.

With help from the package, the government aims to get the economy back to pre-pandemic levels next fiscal year, the officials said. But, some economists caution negative growth could return amid the recent resurgence of virus infections.

The latest stimulus follows a total of 57.60 trillion yen earmarked in two previous extra budgets for the current fiscal year and raises concerns over Japan’s fiscal health, the worst among major developed countries. 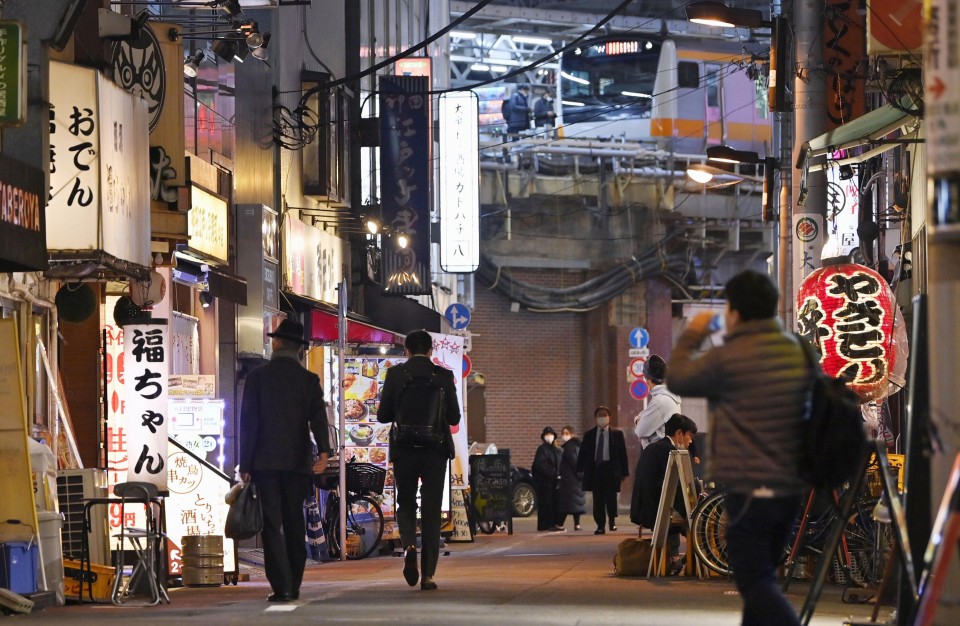 Few people walk along a street filled with restaurants and bars near Kanda Station in Tokyo on Dec. 7, 2020, amid the novel coronavirus pandemic. (Kyodo) ==Kyodo

Japan’s public debt already exceeded 1,100 trillion yen as of the end of fiscal 2019, more than double its gross domestic product, and its total budget for fiscal 2020 has swelled to over 160 trillion yen even before the compilation of a third extra budget.

Among the latest stimulus steps, the government’s “Go To Travel” subsidy campaign launched in July will continue until June next year, beyond its original end date of late January. The program has recently been criticized for putting a priority on reviving the economy rather than preventing the further spread of the virus.

The government will extend until late February a special measure to boost financial assistance to companies that have been forced to furlough employees due to worsening business conditions amid the pandemic. The measure was due to expire at the year-end.

The government will also increase subsidies to help local governments make up for losses suffered by restaurants and bars that comply with requests to shorten their operating hours. Financial support for medical institutions will also be raised to secure more beds for COVID-19 patients and prepare for administering vaccinations.

Among policy measures to bolster longer-term economic growth, 2 trillion yen will be earmarked to set up a fund for firms developing green technologies such as next-generation batteries, hydrogen fuel and carbon recycling over the next decade, as the country seeks to achieve carbon neutrality by 2050.

Among the past measures were 100,000 yen cash handouts to all of Japan’s 126 million residents.