TOKYO – Japan reported Wednesday a near-record 1,547 cases of the novel coronavirus, the highest level since early August, amid signs of what some health experts say is a “third wave” of infections as cooler temperatures arrive and people spend more time indoors without enough ventilation.

The nationwide tally, compiled by Kyodo News based on official information, inched closer to the single-day record of 1,596 logged on Aug. 7 after areas with big urban populations saw a spike in the number of new cases.

Tokyo confirmed 317 cases, topping the 300 mark for the first time since Aug. 20, bringing its cumulative total to 33,377, the highest by far among the country’s 47 prefectures.

Osaka, Hyogo and Saitama prefectures all reported record single-day increases since the outbreak of the virus, while there has also been a rapid rise of cluster infections in northern regions such as Hokkaido, a popular tourist destination.

“This can be regarded as a third wave (of the coronavirus),” Toshio Nakagawa, head of the Japan Medical Association, told a press conference.

Tokyo has been seeing an uptick in infections since the beginning of November, with the average daily number of new cases in the capital over the previous seven days exceeding 250, which is equivalent to that of late August, the month that the spread of the virus peaked in Japan.

Osaka, which has the second-highest cumulative total, reported 256 new cases and its neighboring prefecture of Hyogo confirmed 70 cases of the virus.

The latest numbers bring Japan’s nationwide cumulative total to 112,767 cases, including around 700 from the Diamond Princess, a cruise ship that was quarantined in Yokohama in February. The death toll now stands at 1,876.

“At this stage, we are not in a situation to declare a state of emergency,” Yasutoshi Nishimura, minister in charge of the Japanese government’s coronavirus response, told a press conference.

Nishimura, however, said the government will step up measures to prevent a wider spread of the virus as “the trend of increase is becoming conspicuous.”

The high infection numbers across the country come amid Japan’s shift toward easing restrictions as part of efforts to revitalize the economy battered by the pandemic.

The government launched a domestic travel subsidy program in July, allowing people to make trips at a discount rate.

Japan has also lifted its entry ban on foreign travelers from such countries as Australia, South Korea, Singapore, Thailand, New Zealand and Vietnam plus Taiwan for non-tourist arrivals. 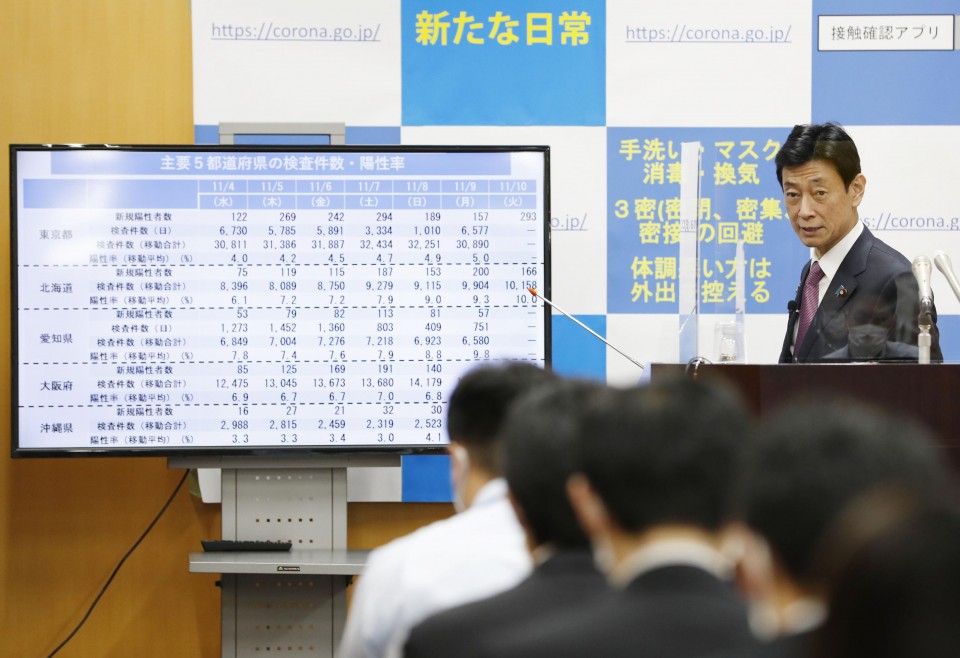 Japanese economic revitalization minister Yasutoshi Nishimura speaks at a press conference in Tokyo on Nov. 11, 2020, as the country sees an increase in coronavirus cases. (Kyodo) ==Kyodo 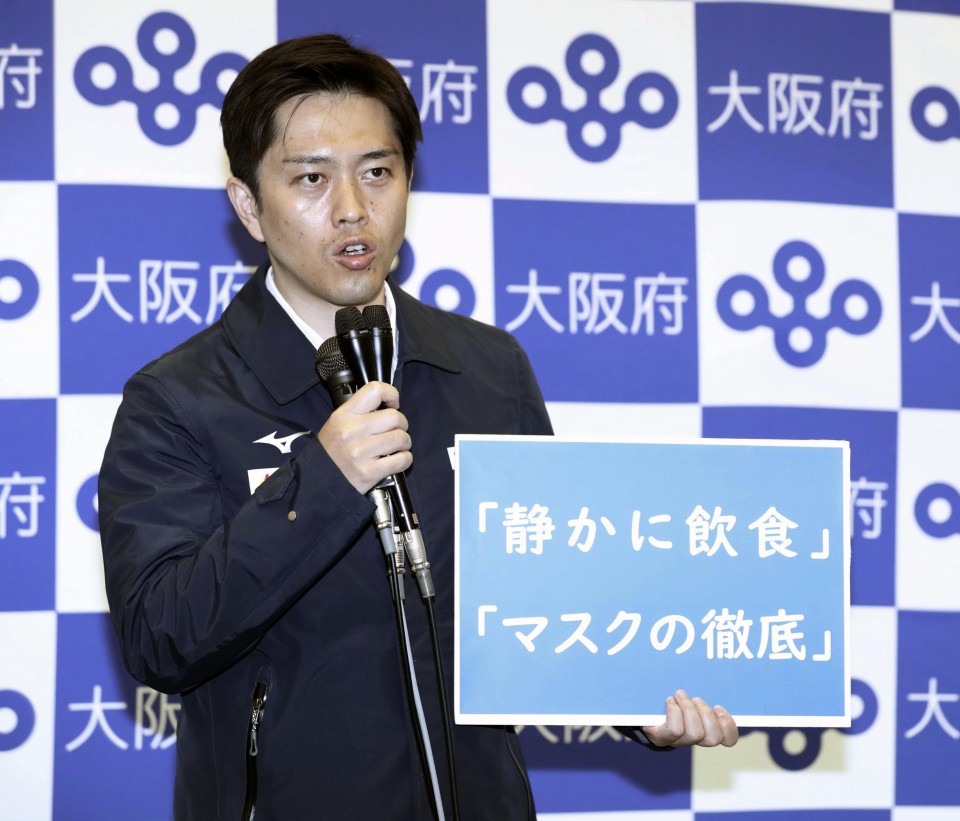 Osaka Gov. Hirofumi Yoshimura speaks at a press conference on Nov. 11, 2020, following a meeting of the prefectural government’s anti-coronavirus task force, as a record 256 new cases were confirmed the same day in the western Japan prefecture. (Kyodo) ==Kyodo