TOKYO – The coronavirus pandemic has forced society to reshape how people interact, and robots are fast filling the void, even to the point of helping alleviate feelings of loneliness in a world where social distancing has become the new norm.

While automatons were primarily utilized to perform menial tasks such as cleaning in the past, their ability to remove the need for close contact has now elevated their status and importance.

In February, robot and technology solutions company Seikatsu Kakumei Inc. began selling what it dubbed a “digital teleportation robot” package to help businesses carry out customer-facing activities during the pandemic.

By helping shops, showrooms, conventions and trade exhibitions handle visitors, robots “can bring people closer to the normal state of communication,” said CEO Yuko Miyazawa. “Being holed up in a room is unnatural for human beings,” he added.

The service, which quickly became one of the Saitama-based company’s most popular products, provides remote-controlled avatar robots to replace staff. The operator’s face is shown in real-time on a tablet screen at the top of the robot, which can be navigated to lead customers to product displays.

“People come because they want to see the actual product,” Miyazawa said. “If that value is lost, then there’s no difference to just shopping online.”

Since April, one of the company’s biggest clients, major Japanese homebuilder Aqurahome Co., has stationed such avatar robots at 17 model houses across the country for agents to show around potential buyers, with plans to expand the service. 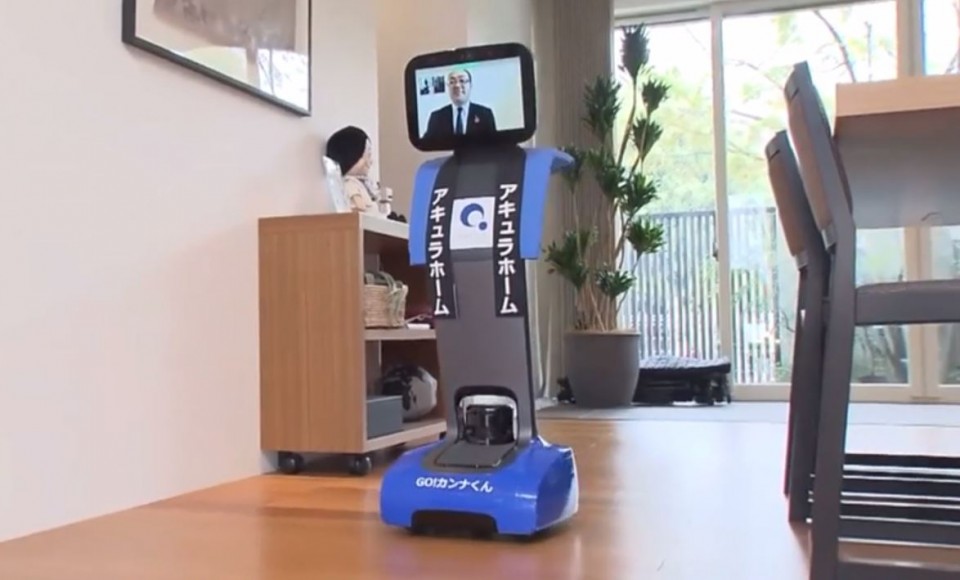 In addition to helping them adhere to social distancing norms, robots are cost-efficient for businesses, which no longer need to pay for staff’s travel costs to specific venues. And the experts or sales representatives who operate them remotely can be anywhere in the world.

Another effect of the pandemic is to nudge traditional companies, many of which have been reluctant to move away from a deeply entrenched “face-to-face” culture, toward embracing the possibilities technological change provides.

“Companies that avoided carrying out their business activities due to infection fears have now turned to technology as a solution. And once the technology has solved the issue, they think, ‘hey, things are even better than before,'” Miyazawa said.

Restaurants and stores have also been forced to think of new ways to operate while coexisting with the virus. In July, The Galley Seafood & Grill restaurant in Tokyo’s Setagaya Ward opened with two “waiter” robots as part of its staff to create a contactless salad bar service. 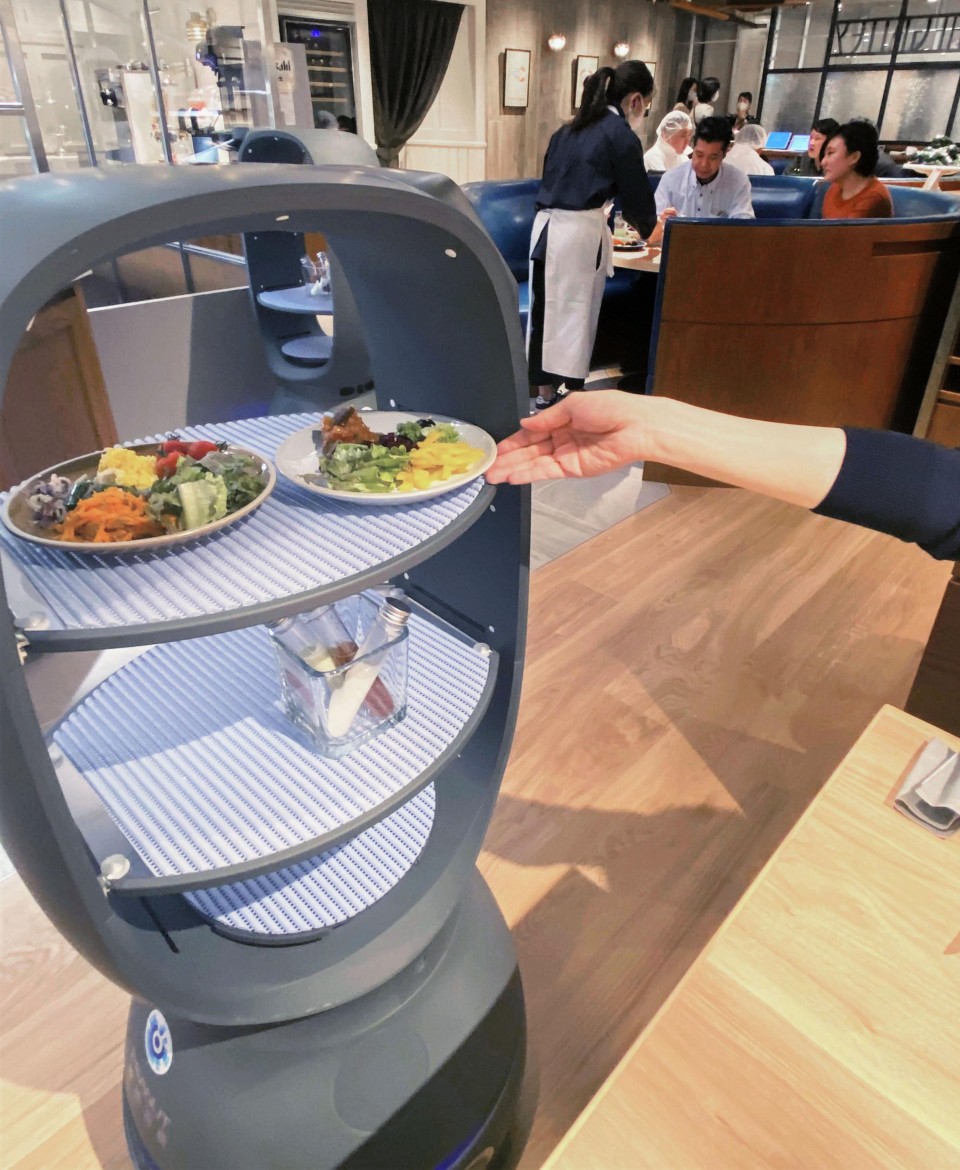 Guided by specially-coded stickers mounted on the ceiling that it “sees” through an upward-pointing camera, the autonomous commercial service robot can deliver salad bar dishes right to the customer’s table. Multi-sensor fusion technology, based on infrared, 3D mapping and machine vision, also enable the wagon-shaped robot to avoid people and other obstacles while moving.

“Warm customer service used to be valued at restaurants, but the coronavirus pandemic has changed that way of thinking,” said Hiroya Nakano, CEO of QBIT Robotics Inc.

Meanwhile, robotics company Telexistence Inc. last month trialed using its sleek remote-controlled robot “Model-T” to restock drink shelves at a FamilyMart store in Tokyo’s Toshima Ward. The human-sized robot, which has three-pronged hands that enable it to pick up items, is remotely operated by a “pilot” using a virtual reality terminal. 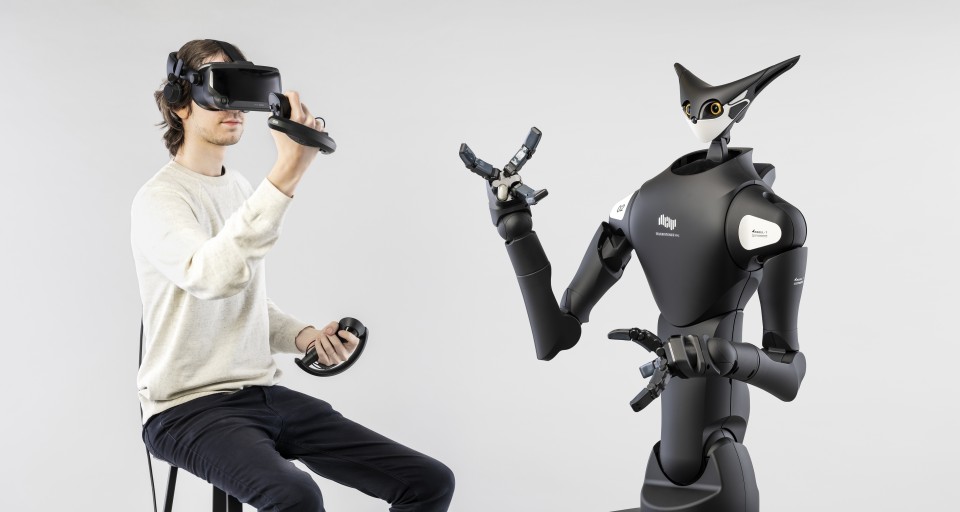 A latency of only 50 milliseconds in the end-to-end video transmission between the surrogate robot’s camera and the pilot’s display means there is virtually no gap between the visual and physical sensations, according to a press release by the company.

Telexistence plans to deploy the robots to up to 20 branches by 2022, eventually rolling them out to all FamilyMart stores. They will be used to automate merchandise restocking, said to account for a large chunk of the workload in convenience stores, reducing the operational burden and infection risks for employees.

Some fear that this reduction in human contact may harm people’s mental and emotional wellbeing. But if robots are facilitating this state of affairs, their proponents say they may also be part of the solution.

Romotto specializes in renting out small “communication” robots online for both personal and corporate use. With the click of a button, individuals can choose from six different kinds of robot for delivery to their doors, while businesses can choose from 11.

The service, which allows customers to rent a robot as easily as renting a car, aims to help people relax and alleviate feelings of isolation, says Yukinori Izumi, founder and CEO of the service’s Fukuoka-based operator Rocket Road Co.

“After talking with developers of around 17 different kinds of robots about making them accessible to the average person at a low price, I created the (Romotto) business model. And then the coronavirus hit,” he said, adding that business has steadily risen since its launch on June 25. 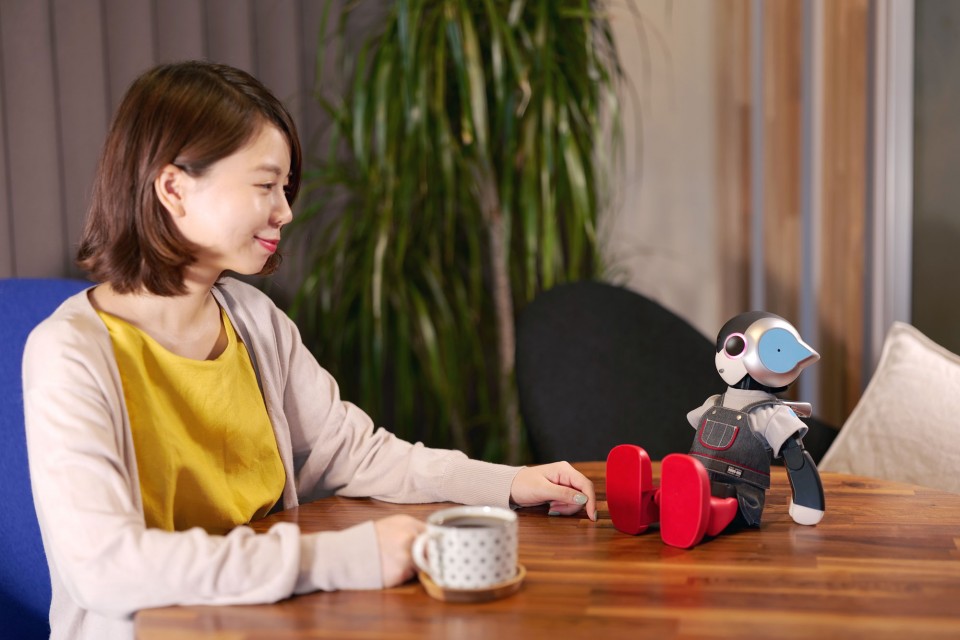 Around 90 percent of individual customers are women in their 20s to 60s, with Aibo, a robotic dog developed by Sony Corp., and RoBoHoN, a miniature humanoid robot created by Sharp Corp., the most popular, according to Izumi.

“Men tend to look at robots as hardware, so they are only concerned with their specifications,” he said. “But women see them as like a pet, or as a companion when they’re lonely at home.”

A passion for creating high-quality apparel was Izumi’s route into the world of robots. In 2016, he launched Robo-Uni — said to be the world’s only dedicated maker of customized clothing for communication robots. Made from hi-tech material used in space and hospitals, the clothing is specially designed to prevent robots from overheating. 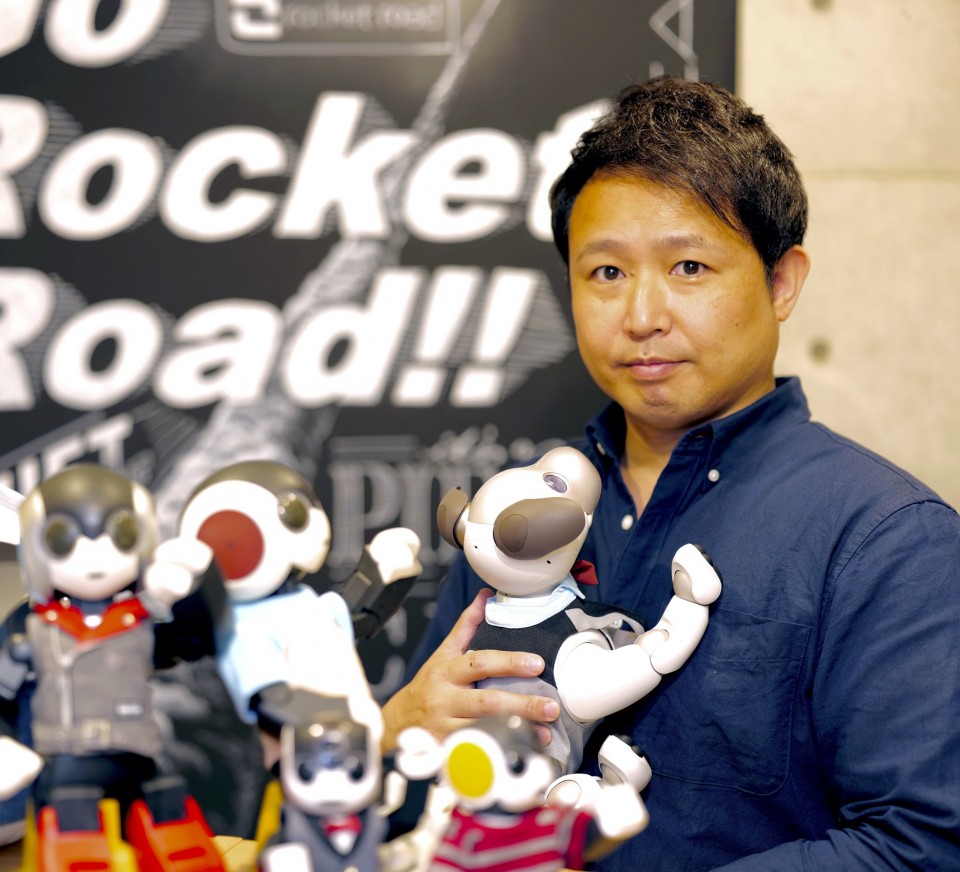 “When we dressed a Pepper robot in clothes made for commercially-available fashion lines, it overheated in just an hour. But it didn’t overheat at all when wearing our Robo-Uni clothes,” said Izumi, who was soon contracted by all the big names in robot production, including SoftBank Robotics Corp., Sony and Sharp, to design uniforms for their creations.

But despite Robo-Uni being a pioneer in robot clothing, few people actually owned robots and even fewer thought of dressing them up. The Kyoto Prefecture native soon realized there was a need to expand the market to make his niche viable, and the idea for Romotto was born.

Around 60 different types of robot clothing developed by Robo-Uni can be rented on Romotto together with the robot. If customers fall in love with their robot companion after renting, they can also buy the model and favorite robot apparel themselves.

“If robots aren’t wearing uniforms, it’s hard to understand their roles,” said Izumi, whose plans include creating unique uniforms to highlight the specific jobs robots will perform as they become more ubiquitous.

“But if the robot is wearing a nurse outfit or a concierge suit, then people can immediately tell what they’re there for,” he said.