HANOI – The foreign ministers of the 10-member Association of Southeast Asian Nations met Wednesday, with the coronavirus pandemic, territorial disputes in the South China Sea and Rohingya refugees high on the agenda.

ASEAN-related gatherings through Saturday are being held via videoconference due to the pandemic, which has made international travel difficult. The meetings were originally scheduled for early August in Hanoi, the capital of Vietnam, which is the regional group’s chair this year.

The pandemic dominated the day’s talks, as underlined in a draft joint communique seen by Kyodo News but not yet finalized ahead of its planned release after the one-day ASEAN foreign ministerial meeting concludes.

In the draft, the ministers acknowledge “a severe and multidimensional impact” from the coronavirus pandemic on the region through such challenges as widespread supply chain disruptions, job losses and demand shocks.

But the ministers also express optimism about a quick recovery from the pandemic’s fallout due to member countries’ “strong mettle and self-reliance” and support from their partners outside ASEAN.

In his remarks, Vietnamese Prime Minister Nguyen Xuan Phuc proposed making use of a regional COVID-19 response fund and the ASEAN Regional Reserve of Medical Supplies established after ASEAN leaders agreed in April to help procure crucial medical supplies and equipment for frontline response and prevention efforts in all member states.

“We need to promptly help our people and businesses restore production and return their life to normal in order to speed up economic recovery,” the prime minister told the foreign ministers via video link. 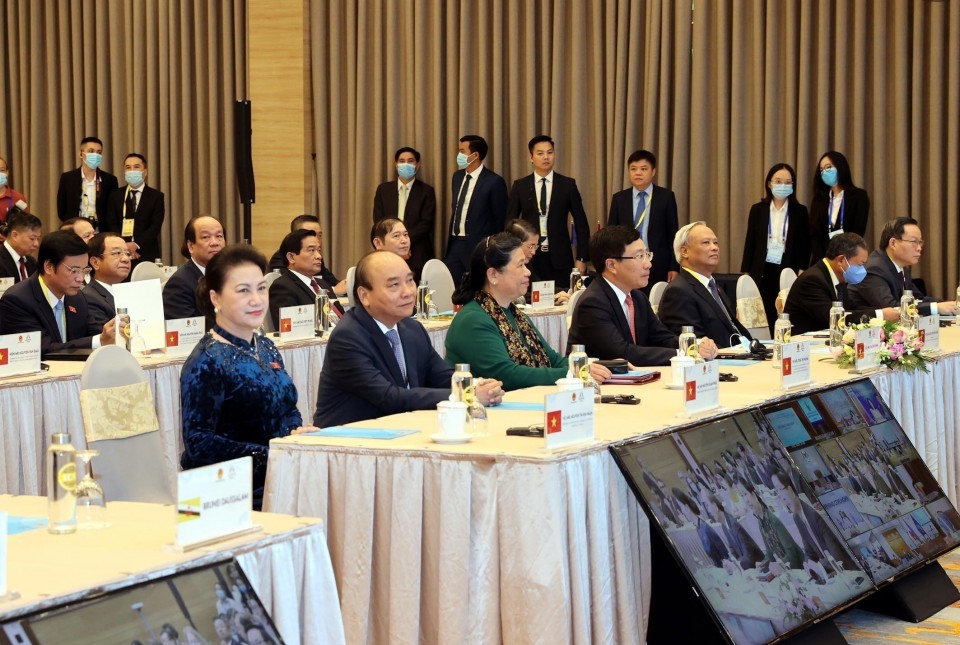 Vietnamese representatives attend the opening ceremony of a virtual meeting of the foreign ministers of the 10-member Association of Southeast Asian Nations in Hanoi, Vietnam on Sept 9, 2020. (PHOTO NOT FOR SALE)(VNA/Kyodo)

One of the other issues discussed at the ministerial conference was the South China Sea, where tensions have risen since the United States’ recent formal rejection of China’s claims to offshore resources in most of the waters.

In the South China Sea — home to some of the world’s busiest sea lanes — China has in recent years built artificial islands with military infrastructure, much to the consternation of some ASEAN countries with overlapping territorial claims.

While not fully agreed upon, a portion of the draft communique mentions the foreign ministers’ “concerns on land reclamations, activities and serious incidents in the South China Sea.”

The statement also says these developments “have eroded trust and confidence, increased tensions and may undermine peace, security and stability in the region.”

However, member countries were divided over how to deal with the growing presence of China in the sea.

In an apparent attempt to ease harsh tones over China’s behavior, Malaysian Foreign Minister Hishamuddin Tun Hussein said the South China Sea issue “must be managed and resolved in a rational manner” and ASEAN has to “look at all avenues, all approaches, to ensure our region is not complicated further by other powers.”

“Such a situation will surely bring impacts to peace, stability and welfare in the region (and) what is more worrying is that other countries have frequently been sandwiched and forced to choose,” she said.

“Rivalry will not benefit anyone,” the minister added, calling on all sides to focus instead on improving cooperation.

File photo shows the U.S. aircraft carrier Ronald Reagan leaving Yokosuka base near Tokyo on June 8, 2020, to conduct military exercises in the South China Sea on July 4 along with another U.S. aircraft carrier, the Nimitz, with China holding drills in the area it claims almost entirely. (Kyodo)

The draft also touches on Rohingya Muslims sheltering in some ASEAN countries after fleeing Myanmar’s western Rakhine State to neighboring Bangladesh to escape a military crackdown on insurgents.

Since August 2017, over 740,000 Rohingya have fled to Bangladesh. International efforts to repatriate them have failed so far, as the refugees remain fearful of violence in Buddhist-majority Myanmar.

The foreign ministers’ meeting will be followed by a series of related meetings involving ASEAN partner countries, such as Japan, China and the United States, with the four-day event culminating in Saturday’s ASEAN Regional Forum, a security-themed conference that also includes North Korea.